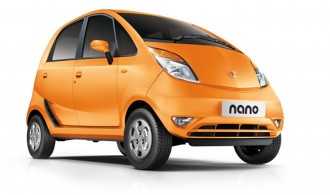 Tata Nano was the cheapest car in India and also in the world. It is sold in India around 2,500 dollars. It was manufactured by Tata Motor Limited, the largest automobile company in India. The car was designed to become a “People’s car” which is affordable by almost everybody. Tata Nano first launched in April 2009 and it was expected to be in Indian market by July 2009. Since launching, it had created a huge buzz all over the media as well as the rest of the world. Within the first few days of booking 200,000 car had booked. Also Nano was a great idea but practically it never achieved its goal and the sale rate declined over the years and finally management decided to stop the production line. In following sections, we will analyze different parameters involving in Nano marketing. We suggest that Tata change its marketing target to designing a decent and trendy cool car which can target both youth people as well as medium class two wheelers owner.

India Automotive market has an amazing grow and it is predicted that Indian auto market exceed the EU and US market very soon. (Company, 2011) (See Exhibit2). Tata Motors limited was India’s largest automobile company, with revenue of 8.8 billion dollars in 2007-08. It was the leader in commercial vehicles in each segment, and among the top three in passenger vehicles with winning products in the compact, midsize car and utility vehicle segments.

India population is about 1.21 billion people, representing a full 17% of the earth’s population. There are three Customer Categories:

Generally, Nano is perceived to be a city car rather than be a rural Car. According to census data in 2011, Over 31% of the population was urban. And among those who lives in urban areas we can divide the Indian auto market geographically in these two segments:

Two Wheeler manufacturers were indirect competitor of Nano because Tata Nano was focused on capturing their market. 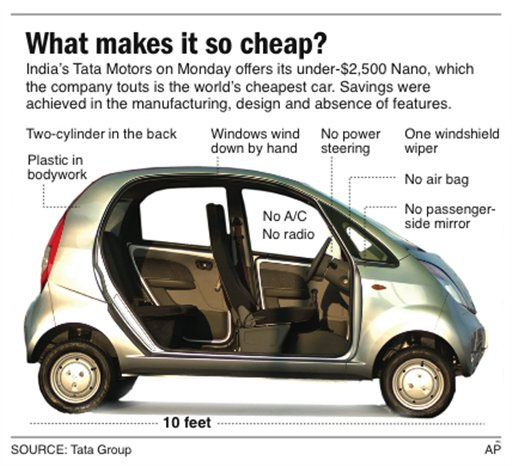 Cost of being Low Price:

Tata focused on building a low-cost car with a certain target price, these criteria lead them to remove and sacrifice several basic features from original design. While they achieved their goal to build a car with target price of 2500 $ at the designed car had several safety issues which brought this public image that the car doesn’t meet the minimum required safety measures. It is true that being low price is one of the main competition factors in passenger markets but we should also consider that buying a car – even when the price is 2500 $- is still a big investment for most of people. And when people pay that amount of money they expect to own a product with minimum feature set. So if we had this chance to be part of Nano design, definitely we would suggest to change the main design goal to keep the minimum feature set or remove the basic features based on the consumer survey which would guaranty that removing a feature would not have a big negative impact on product public image.

Do it right the first time – First Product Public Image:

People make snap judgements. It takes only 1/10th of a second to form a first impression about a person, and products are no different. For several reasons including the safety issues, late delivery time, no finance options and also low quality materials, Nano was perceived by public as low quality and cheap car. Usually when people make their mind about a product it is really very hard to change that image later. Although Tata took several innovative steps to fix the positioning, marketing and production image later but it was too late to correct the first public impression of the product.

Tata failed to show a proper action in case of fire incidents. They should recall the defected cars, which would increase the general market confidence in Tata Nano. Also during the first booking delay, company should be more responsive about the delivery delay both by doing a better public relation actions and also by compensating the customers for this inconvenient product delivery.

Not a clear positioning strategy:

Tata changed the target market several times, first they wanted to focus on two wheelers on Tier 2 and 3 cities, then after the initial booking it turned out that the most of their booking was done in major urban areas. Then they switched to Youth people. The Marketing agent was talking about Youth segment while at the same time companies’ managers was sending different signal to consumer market.

These all, made the consumer market confused and market was unsure which segment this car was made for.

No initiative on taking Control over Initial Marketing:

Company didn’t have any special advertising plan for product launch. Lack of strong company sponsored advertisement let the public media to drive the initial product introduction which led to magnifying the product problem and failures. Tata should be prepared with an explicit and clear advertising plan before launching the product. This would help company to have full control product launch and possible product problems.

While Nano was expected to find its way in low income two wheeler owners families, but during the first booking period there were no finance option available for customers. Considering that this segment doesn’t have a high disposable income it didn’t make sense that costumers pay full amount in advance then they wait for more than one year to get their cars. Although company took inactivates to sell the Nano using credit cards but the time company started that plan was too late. And it would have better impact if it was during the first product launch.

Tato should focus on both Youth people as well as mid class family people in Tier 2 and 3 cities. But this time instead of focusing on being a “Low Price” car they should focus on being a modern and trendy car. The possible slogans can be “Next Generation Car” or “A New design for modern society”.

Tata should position Nano as fabulous, personal cool car.  One of the best single model car sellers in the world is Volkswagen Beetle, this car has been produced more than 21 million units between 1938 until 2003. There are several similarities between Volkswagen Beetle and Nano. Beetle was also had a goal to be cheap, simple car. But it didn’t lose its market because beyond it is affordable price, people love its design and in social media like Pinterest we see that people is posting pictures of their beetles as a cool car.

Same story can happen for Tata Nano, Company needs to work on exterior and interior design, make it a small lovely car and each person would be proud to own and drive one.

Albeit the engine needs to be more powerful and also Nano need to have more eye catching feature to make more attractive for the young generation.

We would recommend Tata to build three model of Nano:

Joining with Big Bazaar was a good strategy, also F-Class show rooms were a good initiative. This time company should prepare the distribution network before launching the product.

Since the target market is Young people and Low income families, they don’t have good saving neither banks trust them for loans. This will make it harder for them to get a new car. Tata should offer easy financing options for customer which let them buy the car with minimum down payment of 1000 USD and easy load approval.

Tata should give their customer this choose from a wide variety of car body colors or let them to add extra options to their cars, for example a young engineer should be able to order a Nao with alloy rings and his desired color.

Tata should promote the New Nano initially in a pilot market for few months. This will help the company to understand and observe the possible design or parts faults. Also it will help the designers to receive feedback from consumers and give them enough time to add features or fix the problems.

After the pilot, Company Should start a TV adverting campaign in parallel with using other medias like billboards, newsletters and magazines to promote how Chick and modern Nano is.

We expect that market will be interested in this product first by young generation. It will create an atmosphere that introduce Nano as trendy and modern car. Later we predict that the two wheelers will start to buying Nano as they are hearing good stuff about this car. Also the easy financing option also will give them this opportunity to try a decent car.